We start with the guys just casually all sitting around drinking tea. Osher arrives with a date card, they drag it out, but it’s pretty obvious that it is going to Apollo. 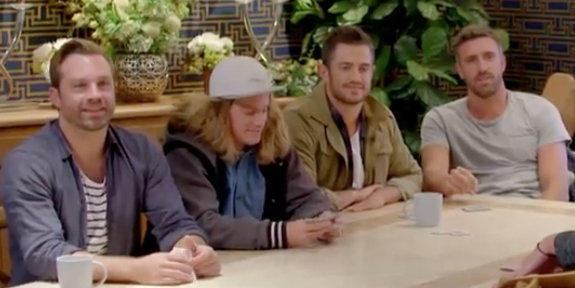 What is going on with Harry’s Hair! He needs to go. Now!

Their date is 1950s themed! So beautiful. Sophie is looking very much like Grace Kelly as she arrives in a vintage car drop top. She keeps talking about how much she likes Apollo, Probably a good thing that you are taking him out on a date then girl. 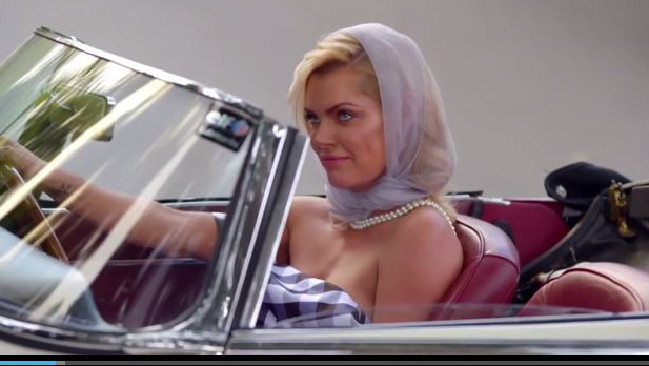 Get in Bitch… We are going on a date

Sophie’s makeup for this date is on point! I really like that they have gone for more of a natural 1950s look instead of just throwing big black winged eyeliner on her. To be honest I think the reason they haven’t done that is that she already has defined features and strong eyeliner like that can make your face look harsh. I would recommend leaving that look to the younger ladies.

The look they have gone for is a stunning pink lipstick, and strongly defined check bones and stunning brows. If you wanted to get this look I would recommend using this highlighter bronzer stick on your cheeks, Pink Honey lipstick, and brown pencil.

They go to a “castle” which I swear every year on the Bachelorette they go to at least twice. They do this weird game where Sophie asks Apollo questions and then they take vintage photos of the answers. Bit weird but it is original. It gets even weirder when Sophie has to pretend to be a scary butterfly and then gives Apollo a foot rub, she says his foot is moist. Oh, that word should be banned from television! 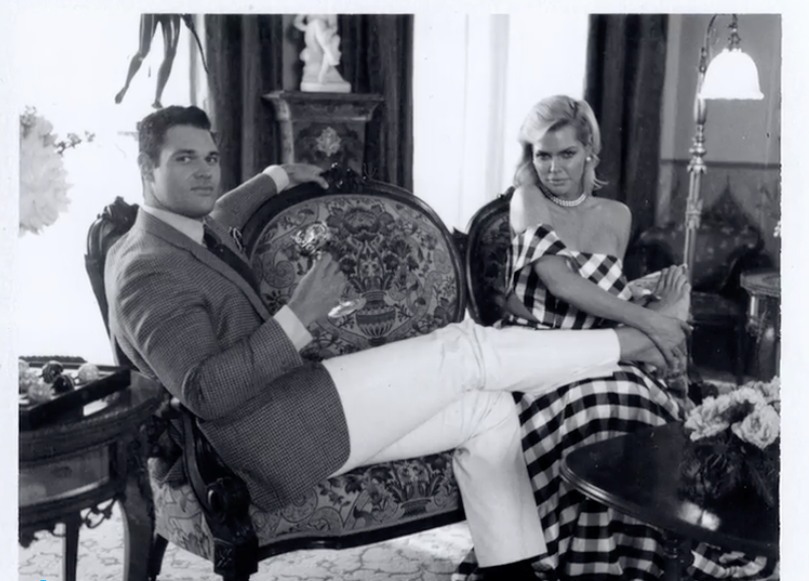 So Romantic and Moist!

They ended trying to make it look like Sophie is juggling by getting Apollo to stand behind her and have his arms in front of her. That’s one way to get physically close on a date. 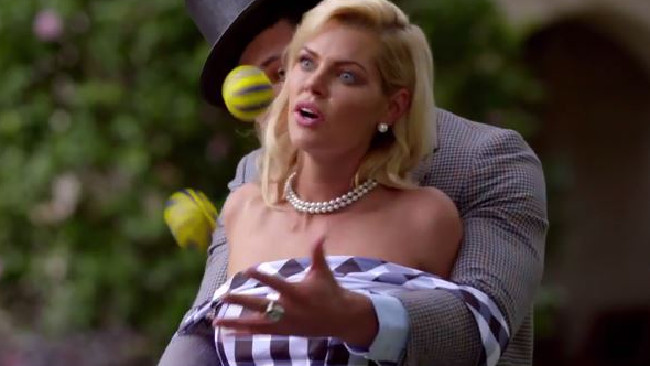 That’s one way of getting intimate

I didn’t realize he was only 24! He seems so much older. He is way more mature.

After the fun and games, they sit down for serious chat and cheese. Apollo reveals he had a heart attack. Wow, that’s intense for someone so young. But he is saying it made him realize he wanted to spend time with people he loved.

They dance, it really is a pretty damn perfect date! And as the cherry on top of the icing – they kiss. It is one of the more natural kisses of the season. Go girl! 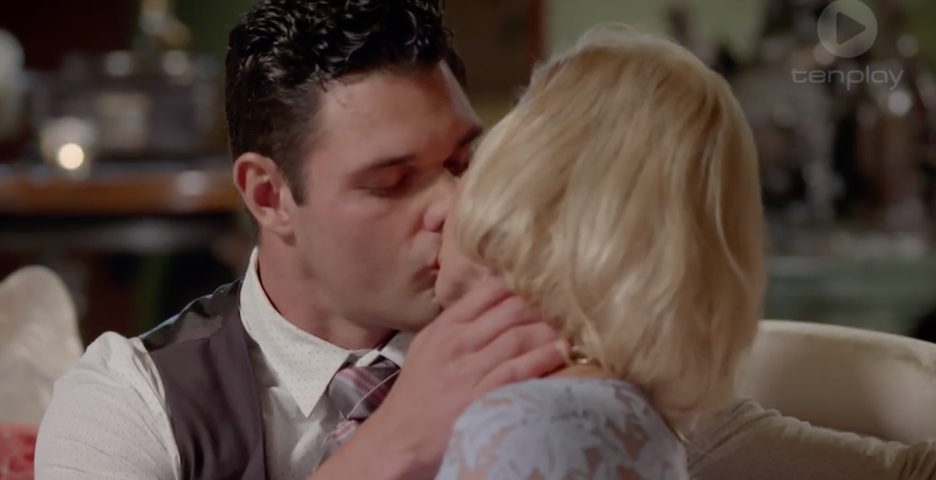 They changed Sophie’s makeup for this part of the date and once again it is stunning! They have gone for a stronger lip colour it is a coral red colour and very matte. If you want a lip colour like this I would recommend Soft Coral Lipstick And did you know you can make any lipstick a matte one! Check out my video about that trick here.

All the guys are on this group date and they are already being very competitive.

When the guys are told there are intruders Jarred says “Food poisoning time” Wow if I was in the mansion I would be scared.

The first one is Guy, 37, optometrist, He is very attractive, British and as Sophie points out he does have a James Bond style happening. 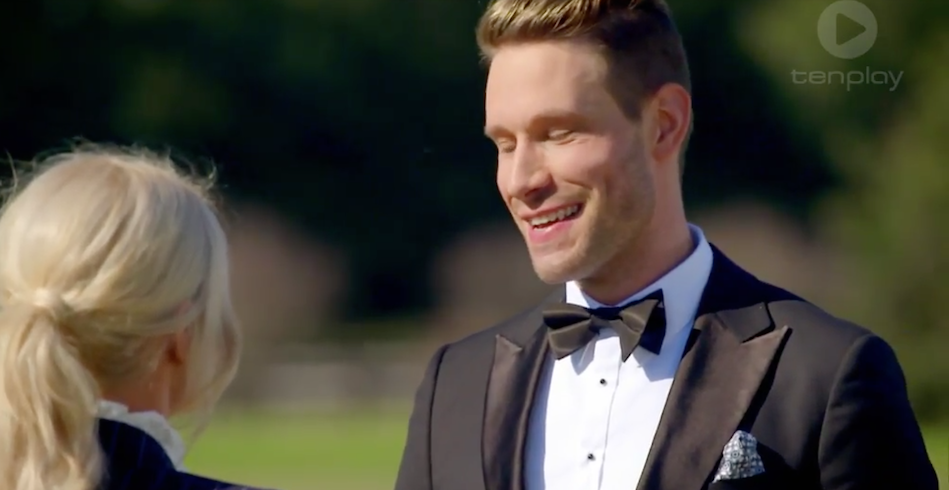 The next guy is less attractive. He is a chef and he has written Sophie a menu. That is the true way to a girl’s heart, through good food. He has 2x children already. He is cute, very nervous. All the guys like him.

Paul is next. He has 5 kids. And he is a grandfather! I feel he won’t make it to the end of the episode. 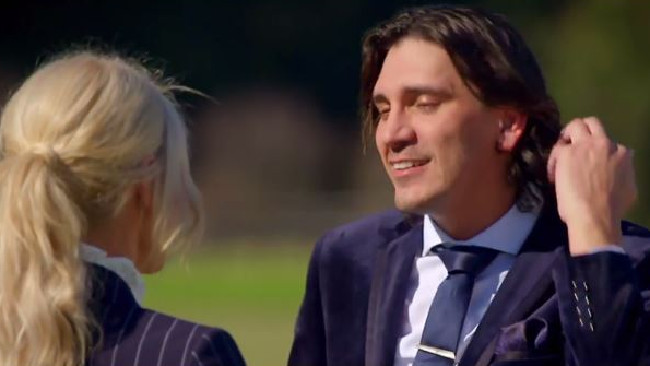 All the original guys are acting so childish and jealous.

Stuart is the final intruder. And shock horror, Sophie and him have met before! Sophie remembers him; apparently, she already stood him up last year. She seems impressed that he would even come on this show after that. 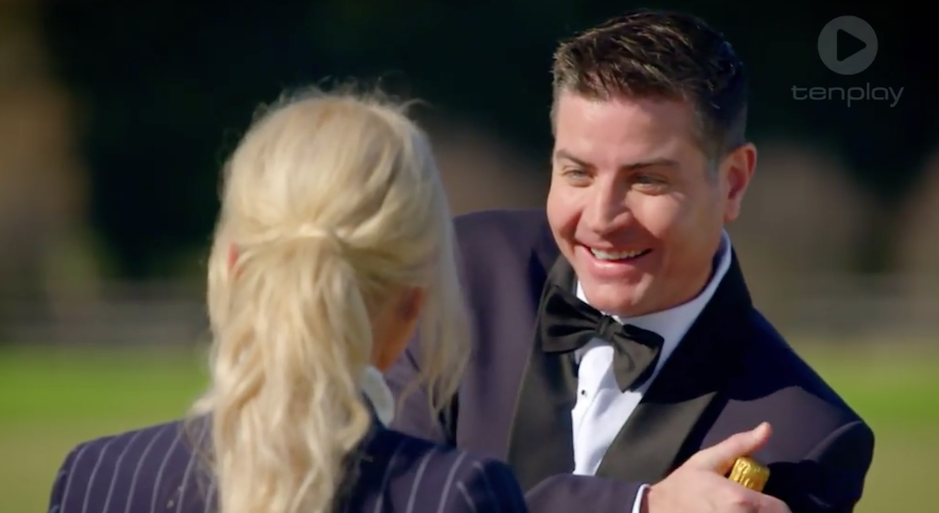 Then into the actual group date activity. Instead of playing polo on horses they do it on push bikes. Sounds horrible. It looks horrible. They have put the older guys against the younger guys. Surprise, surprise Jarrod is being really intense about it 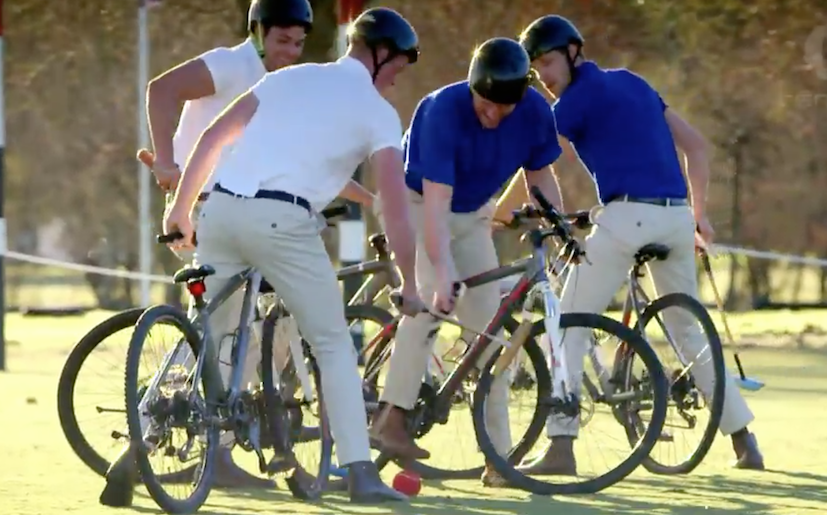 Blake and Jarrod have a little collision. Blake comes out worst for wear with a split lip. He milks it to spend time with Sophie

Time for everyone to chat and drink…. Let the drama begin.

Sophie brushes past Stuart and “accidentally” kisses him on the lips. Jarrod overhears this and he is sooooooo angry.

These guys are being bitchier to the intruders than the girls normally are. And are openly discussing who is going home.

We really don’t see much of Sophie talking to the guys.

Osher appears again and informs everyone the Rose ceremony starts in 30minutes! Dramatic.

Sophie’s makeup for his date is again very natural and beautiful.

4 guys must go. Just as Sophie is about to hand out the last rose, she gets upset and runs out the door. Osher is so on it, he is there in a heartbeat telling her it is okay. She says she feels bad having to send so many people home. Osher is being super supportive but you can kind of tell he just wants to say “Sorry hun it’s what you signed up for”

Other teaching Sophie how to break hearts!

Sophie eventually comes back and calls out one of the intruder’s name. You can hear and see the shock. 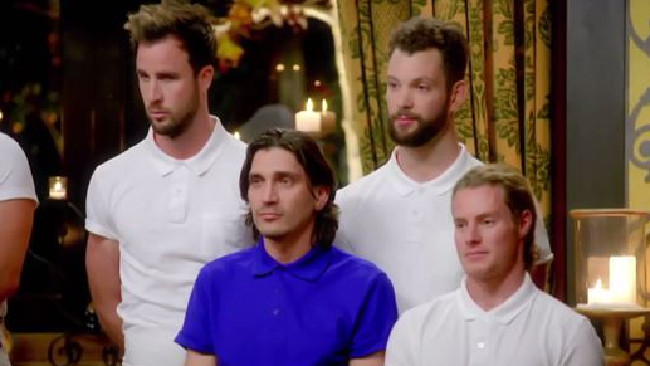 She sends home Hayden, Harry, Brett (who I really think should have gotten more screen time!) and the grandpa intruder who looked younger than most of the guys. I must find out what skincare he uses.

Harry is very sweet at the end and says that she is going to find her love in that group of men, just like he did. It went from sweet to weird really quickly. 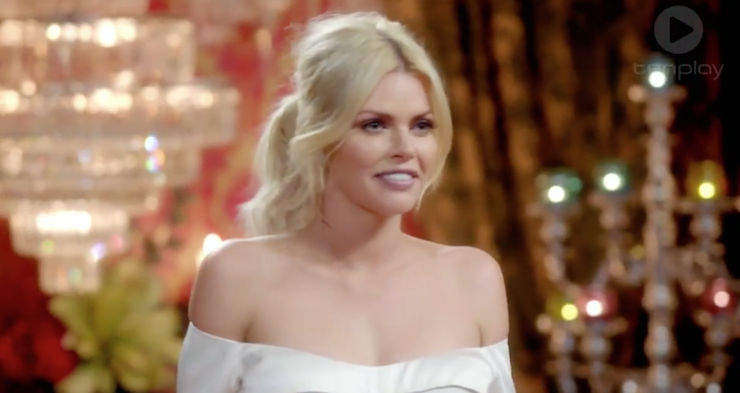 Sophie’s makeup for the Rose Ceremony was very on trend tonight. The key aspect being harder maroon coloured lipstick. It’s so good. I love how they have been really changing up all her looks.

If you wanted to achieve this look I would recommend Willow Lipstick!

P.S. Check out my free e-Book all about how to find the right foundation colour for you! 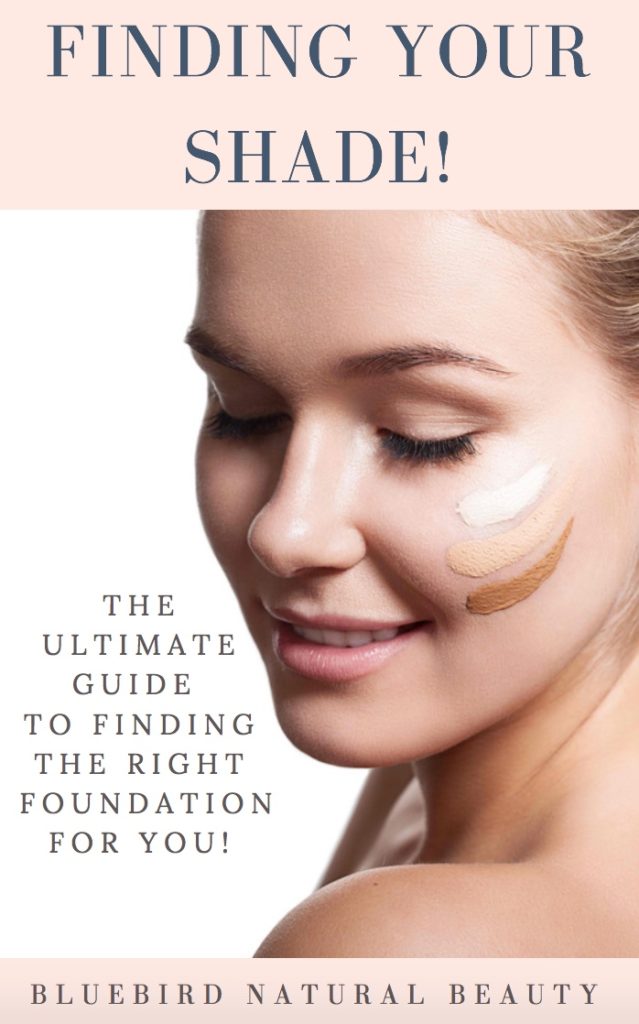