We jump straight back into the Florence, Jake, Davey and Leah drama. Davey is so pissed off that Jake cut in and asked Florence out on a date.

So Jake and Flo go off on their date, once again she is just wearing a bikini top. The date is super awkward with Flo saying she doesn’t know what they can talk about and the producers putting uneasy music over the top to create more drama as if we don’t all know they are going to end up kissing under the waterfall before this date ends.

Flo’s makeup is still pretty full on for such a relaxed date, I think I am going to be saying this A LOT this season. 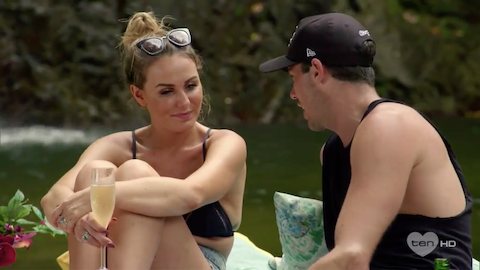 Cut back to everyone at the Paradise base camp. Eden and Nina have made quick work and are literally cuddling together. Leah has said she is giving Mack her rose, which surprises me. We have been so focused on the Jake, Flo and Davey drama we have missed everyone else getting together. 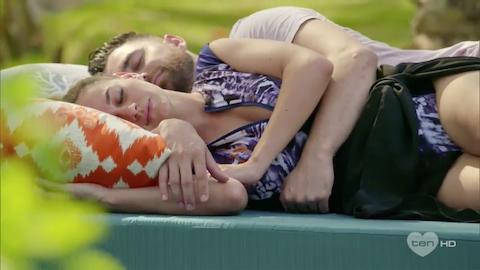 Cute but we missed it.

Everyone is literally talking about how it would be terrible if another guy came in, suddenly we cut to a peacock crowing with the subtitles “It’s another dude” my goodness the producers are having a lot more fun with this show. And it’s …… Sam. As Nina puts it he is the short, blonde child. Most of the girls straight away say they aren’t giving him a rose. But we will see.

Back to the awkward date, they decide to go swimming and as soon as Flo says “one date isn’t going to fix everything” they are sucking each other’s faces off. But Flo doesn’t look too happy with herself. Neither are we hun.

The boys are all giving Sam the low down on who is with who and that the girls have the power. Sam very quickly realized Keira is his only chance and he is straight in there. But it seems to work because Keira doesn’t like anyone else. 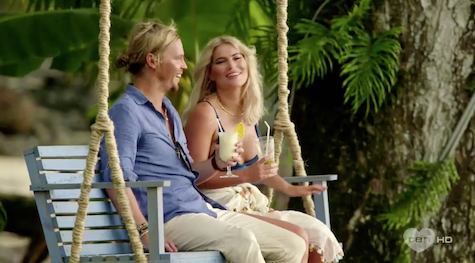 Two of a kind.

Flo and Jake finally appear after their date holding hands, and Davey is not impressed. But Jake is acting like he has no idea why Davey is upset. God Jake pull your head in mate.

Now the girls time to debrief from the date, and Flo is saying she isn’t sure if she will give her rose to Jake, Keira goes “You’re brutal, I love it” Say what you will about Keira but she is thinking the same as most Australians right now.

All the girls are chatting about how Brett hasn’t made a connection with anyone and how he is just waiting for a girl to come in who he is clearly already dating. So turns out Tara has been trying to convince the other girls to keep Brett around. And it’s all coming out now. …..and his girlfriend’s name is Steph. The internet is about to blow up with this.

Laurina, is coming in. She is a handful, we know from the ads that she has a pretty massive list of things she wants in a man. But at least she can admit it’s a big list. Oooo she has a date card. 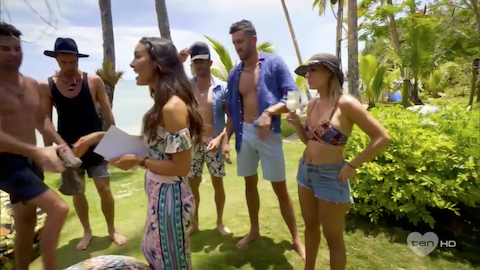 Everyone is excited for new meat.

And Blake is straight in there; he has his game face on to get this date. Laurina likes it and offers him the date straight away. Even he is a bit taken aback by it. Seems that Blake is trying to redeem himself and even admits he made mistakes. But first, he needs to redeem himself from wearing that terrible hat!

Their date gets a little dirty (pun intended) with a body treatment of hot mud. The sparks are flying between them. And Blake is straight in there for the kiss. Blake is soooooo happy with himself but then Laurina rates the date only a 6 out of 10. This girl is harsh. 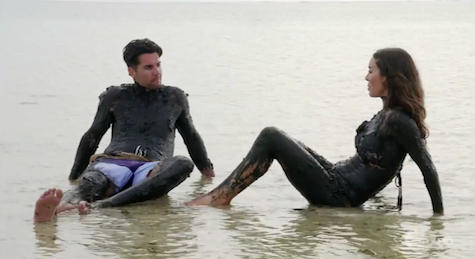 I feel like Channel 10 has done this before but with Chocolate. I don’t know which is better.

Tara is getting upset about everyone thinking she is trying to get girls to keep Brett. Now she is saying she thought everyone knew Steph and Brett were dating. That makes no sense hun. And she gets very upset. I honestly believe Tara has just gotten caught in the crossfire of Brett’s drama. She gets so upset that she runs off and we see a producer running after her. But I think this is just the beginning of the drama. 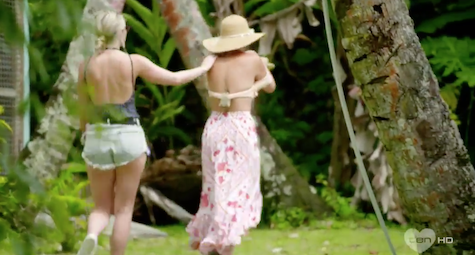 Tara can’t take the drama, you came on a reality tv show for the second time hun. You should know by now its all about the drama.

The producers clearly go get Flo to chat about it. They take Tara to talk to Brett. Brett says to Tara to not worry about it. It’s all very confusing. Suddenly the producer is there and is talking to Brett directly. It’s all very shocking. The producer explains that if he isn’t single then it’s against the whole process of the show. Which is a very valid point. Brett says he isn’t in a relationship with Steph. Instead, he says they have been seeing each other for a year but that doesn’t mean they’re Facebook official. I can’t believe nowadays the real indicator of if you are in a relationship or not is if you have changed your status on Facebook. Tara realizes someone has been lying to her.

Flo comes in a stunning red dress. Jake steals her away. He keeps going on about how much he likes her.

Then as soon as they are back Davey jumps on Flo. But he very cutely made her flowers. And he goes on about how much he likes her. Flo really can’t seem to make up her mind.

The all ones who are coupled up go first.

Tara picks Michael, but she doesn’t seem happy about it and it’s a bit awkward.

And it’s down to Florence. They build the suspense as much as they can. And…..drumroll…….. She picks Jake.

Davey is devastated or as he would probably say devo.

And Brett is the other person who goes home. So he can go meet his girl on the outside. Bye!

So much drama and this is just the beginning!

This look was just not great. If you are wearing a stunning red dress that is a cool red colour, don’t wear a warm pink lipstick, it clashes! That outfit would be so much better, with a cool red lipstick of a shade similar to the dress. I would recommend the shade Just Red to her. 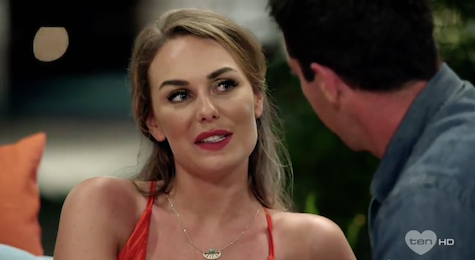 Just no. To the Lipstick and to Jake.

All her looks were very beautiful, She made her stunning grey eyes the focus of the look with a little bit of eyeliner on the top and bottom of her eye. Since she isn’t wearing false lashes it still looks natural. And the pink blush she had on was beautiful. If you wanted to recreate this look I would recommend Sassy Salmon Blush and Black eyeliner pencil. 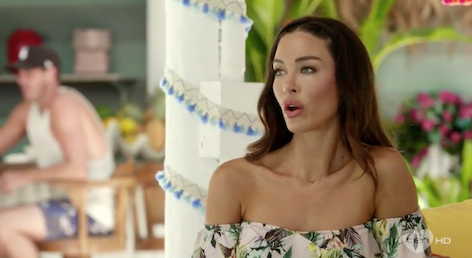 She is high on both the hot and crazy scale.

Her makeup for the rose ceremony was a bit strange if there is a time in paradise for full glam makeup it would be now. But she hardly looks like she is wearing anything. She has used bronzer on her cheeks instead of blush and it just makes her look washed out and pale. She doesn’t seem to be wearing any lashes or even mascara, maybe because she was crying earlier in the day. If she has added a stronger lip colour it would have helped. 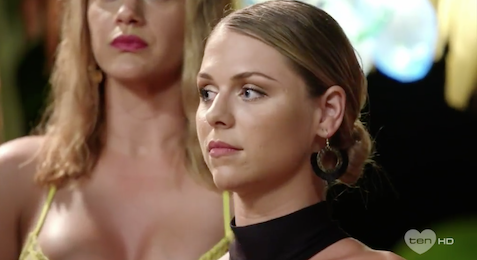 Her makeup for the rose ceremony was pretty especially with the bright pink lip and her hair up and big earrings. The pink matches her fair skin beautifully. Damn I never planned on actually liking her or her makeup but she keeps doing good looks. 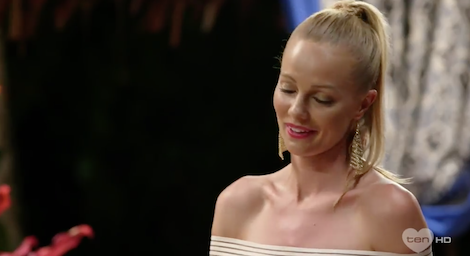 Leah looking good. Mack is a lucky guy in more ways than one.

Till next week Beauties!